Power & Grace-The Difference is in the heart

ear Miracles: I would like to tell you about Anima Sola and her sometimes twin spirit the Intranquil Spirit. When I sit down to write and when I stand up to pray Anima Sola is often the image that comes to my mind. You have probably seen this vision of her too.

To me Anima Sola, whose name literally means the Lonely Soul, is an image that we are all somewhat familiar with, one that we carry with us. She is in bondage, alone, imprisoned, but nevertheless holding out hope, nevertheless keeping her eye on her ultimate goal, refusing to allow immediate circumstance to define every aspect of her experience. This is an aspect of experience that the alchemists of old called the nigredo — the dark period that occurs between two days, the period of dying back, cutting out, and ultimately making space for grace. When I write it is with the hope that my writing will in some way ease the Anima Sola we all possess. When I pray it is with the expectation that my prayers will offer a little bit of healing balm to the lonely soul, a little bit of water to those who have been in a desert for far too long.

Whenever we experience hardships of any kind there are two basic approaches we can cultivate. One approach is to look for the ways in which we may gain power over the hardship. So finances have you down, simply make more money. Love not working out the way you want it to, find a new lover, someone betrayed you, take vengeance on them (and make it good). The path of power is a tempting path to walk for many reasons, but one of the most prominent is that power is effective. Wielding power can get you what you want (or what you think you want) in double time. The second approach we can take to hardship though is grace. Grace is defined in many ways but when we look at the word’s Latin root we see gratus which is a cognate of our modern word “grateful.” This gives us a clue about meeting hardship with grace — we come to our experiences with a sense of gratefulness. To be clear, I am not advocating a martyr complex or a need to go looking for difficulties — they will find us, I promise! But to meet what hardships do come with a cheerful optimism, to be grateful for what is present and to be grateful for the opportunity to learn — even in and especially in the most fire hardened moments, this seems to me to be a path of wisdom. Anima Sola and her sometimes sister the Intranquil Spirit illustrate the point beautifully.

The Intranquil Spirit is a figure petitioned in several different systems of folk magic — including African-American based Conjure as well as Mexican folk magic and Catholic Folk traditions. The presence of the Intranquil Spirit is requested, usually by a woman, after a love relationship has ended. She is a coercive spirit and the intention in calling her forth is to torture one’s ex partner to the point that they become so miserable that they are forced to return to their old lover. Although the Intranquil Spirit is usually conceived of as female, some practitioners have observed that there are actually several different kinds of Intranquil Spirits that will show up for a job, some female, some male. Not every spirit worker will work with Intranquil Spirit because the energy invoked is so harsh. Though it’s understandable to anyone who has been through an especially painful break up how one might be in the position of wanting the return of their lover NO MATTER WHAT — magical workers often find that working with the Intranquil Spirit creates more complications than it solves and that the reconciliations this spirit brings about are often still emotionally fraught. Though the spirit is conceived of as feminine, the main traditional image associated with the spirit shows a white bearded man sitting in judgement over the world. 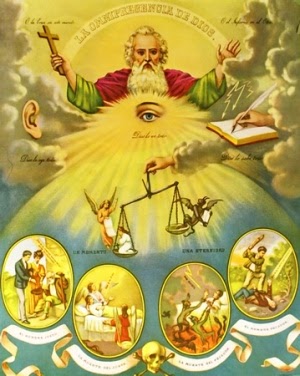 One of the traditional images associated with the Intranquil Spirit. Although the spirit is usually conceived of as female in this image the spirit resembles a male God in a position of judgement.
The Intranquil Spirit’s name gives away the story-it is a spirit who has departed from the physical world — perhaps in a violent or unjust manner — and as a result it continues to cling to the earthly plane looking for peace, closure, and a final resting place but never finding them — thus the Intranquility. The motivation of calling forth such an energy in magic is to make the target of the Intranquil Spirit equally unhappy, restless, and confused until they commit a certain set of specific actions (usually having to do with returning to their lovers). Putting aside the moral issues of compelling someone to do anything by wishing misery and unhappiness upon them, it is obvious that the Intranquil Spirit works through power — specifically overpowering someone so that they act in such a manner that goes against their stated will. The spirit (and magician) who calls upon her expects to win the situation by overpowering the opponent. But there is another way…in magic, in life, and certainly in matters of the heart — and that is the way of Grace.

The image of Anima Sola is a well known image, especially where I live in the Southwest. We see a lovely dark haired and dark eyed beauty whose wrists are chained and who is being licked at by some vicious looking flames. For a non Catholic the assumption would be that the poor girl has landed herself in hell, but she is actually understood to be in Purgatory — the intermediary realm between heaven and hell that a soul achieves when it dies with sins left uncleansed but in a state of grace nonetheless. This state of grace that Anima Sola possessed upon her death is the first clue that she works through grace as opposed to power. In both Catholic and folk magic practices framed by Catholicism, Anima Sola is petitioned by people on behalf of their beloved and departed ones whose souls are believed to be in Purgatory — she is petitioned for deliverance, aid and succor to those who have passed beyond the veil. Her veneration is especially strong in Mexico, South and Central America, and Italy — especially in Naples and Florence. Because her veneration in Italy is well documented and seems to have started around the same time that Dante Aligheri published the Divine Comedy and the concept of Purgatory became widely accepted by the Catholic church I have a personal pet theory that Anima Sola may be based on one of the characters that Dante placed either in Purgatory or in the lowest (least painful) level of the Inferno.

Anima Sola is not simply a spirit prayed to on behalf of those caught in the in-between realm of Purgatory — she is believed to have landed in Purgatory herself due to misplaced romantic affections — she fell in love with the wrong man. How human! How familiar! We are not sure if he was the wrong man because he did not reciprocate, was already married, or did reciprocate and the relationship was inappropriate — but illicit romance is often given as the reason why she is in Purgatory. For this reason she is petitioned and worked with in some magical traditions such as Voudo and Santeria and Lukumi in the same manner that the Intranquil Spirit is. However, what I have found in working with Anima Sola is that she does not work at like the Intranquil Spirit at all — Anima Sola’s transformative magic lies in her state of grace — even as she carries sin upon her, even as she suffers, she is open to grace and her eyes are fixed on transcendence. For those of us who are not Catholic or have a hard time identifying with concepts like sin, heaven, and hell, Anima Sola can still be a wonderful spiritual helper.

Her presence reminds us to be open to grace at all times — and it also reminds us that opening to grace is really all we can do — we cannot make someone love us, bend to our will, or go our way-we can only open ourselves to the grace that lies in all things all around us at all times. In cases unrequited love and/or painful break ups Anima Sola can be a great helper because she understands loneliness — the way it is all consuming much like the flames she is immersed in. Because she understands loneliness, pain, suffering and redemption she also knows (and reminds us) that there is always tomorrow — that even though we may feel in the lowest pit of hell today, tomorrow offers new light, new life, and new hope. In cases where a loving relationship has ended due to a lack of understanding, courage, or care Anima Sola can be petitioned to bring loneliness to the forefront of someone’s mind-not to punish but to remind that the whole is greater than the parts and that turning our back on true love is perhaps the greatest error of all.

How to work with Anima Sola

If the themes around Anima Sola resonate with you on any level you will of course want to know how you can best go about working with her. My experience with Anima Sola is that she likes her image to be placed on your working space — and if you can create a shrine around her all the better. She loves red sequins, flowers, a glass of water, and cinnamon. I burn cinnamon chips on charcoal disks when I am working with her and I also offer her hard cinnamon candies. She is a spirit who works on our hearts and heart-based knowing (as well as heart-based fears) so incorporating herbs and roots that altar the heart’s rhythms and physiology can be appropriate — mandrake and belladonna are two plants that I use for this — external only of course, do not ingest either plant and in fact be careful when handling them as they really do alter your heart’s physiology! Petitioning her on a Saturday is a good way to begin and as I recommend for most spirit work — simply speak or pray from your heart and pay attention to the ways in which she might answer you.

Fill out this form!

Fill out this form!
[email protected]