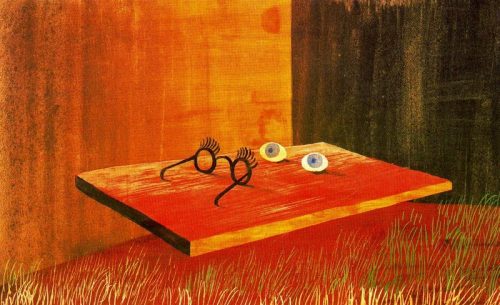 ear Miracles: The “evil eye” or mal ojo as we call it here in San Antonio, is a pan-cultural idea that encompasses a host of beliefs regarding negativity, bad luck, and misfortune. Quite a few scholarly articles have been written on the evil eye but here is the low down information you absolutely need to know.

The first thing to recognize about mal ojo in our current time is that we can carry it with us, in us, and not even know it. Anytime we are seeing incorrectly — with envy or pride or lust or selfishness we could rightly be said to be suffering from the evil eye –our eyes are literally being taken over by an evil force, call it energy, call it spirit, or simply bad will.

In traditional spiritual work the best cure for one who has the evil eye put on them is a limpias — a spiritual bath, and that is the best way to cure oneself of incorrect seeing too — it is a time of cleansing and reconciliation to the self and your true purpose, it can be a time of recommitting to the work you have to do in the world. May it be so. With that said, here are other facets of this idea which may be of use.

2.) Most often the evil eye is believed to be given to someone unintentionally. There are plenty of cases of people feeling that someone has deliberately decided to try to ruin their life through negative thoughts, malevolent prayers, or outright destructive workings. More frequent, however, is the belief that someone called down the evil eye through their own jealousy and was not really trying to harm the object of their attentions.

3.) Symptoms of the evil eye vary from time to time and place to place–but many of them include a general idea of “drying out.”  Water is generally associated with life and life giving forces. When we are too dry we are not as generative, fertile, prosperous, or healthy.

4.) Children and older people are traditionally believed to be the most vulnerable to the evil eye as are women who have just given birth.

5.) Salt is a world wide curative for the evil eye and is also seen as protective against it. So are the colors blue (featured in many of the apotropaic charms we find for the evil eye today) and red–which is favored as a cure and protective color against the evil eye in parts of Africa, Italy, and the UK.

6.) Sugar is second only to salt in its curative abilities as the evil eye is believed to make someone’s life bitter as well as dry. Sugar brings moisture and sweetness to the situation.

7.) Along with sugar and salt, Spiritual Cleansing, is seen as another essential step in both warding off and combating conditions resulting from the evil eye.

8.) The evil eye does not necessarily only come from other people. Many traditions believe that it can be cast on a person by spirits who are displeased or offended for whatever reason.

9.) Rue is the herb most popularly called on to address and combat cases of the evil eye–perhaps because of it’s tiny eye-shaped leaves.

10.) Blessed water/Holy Water can be used to wash someone down who is believed to be afflicted with the evil eye. Start at the head and work down to the feet then dispose of the water at a four way crossroads.

11.) Gold jewelry is a potent ward against the evil eye in many countries.

12.) Conditions brought about by the evil eye can be chronic/repetitive or acute and isolated events.

13.) In Western Europe one old and favored trick to use, is to immediately turn your clothes inside out and walk backwards or in a widdershins (counter clockwise) circle.