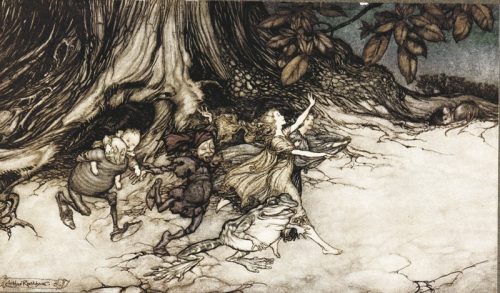 ear Miracles: On this day when the veils are especially thin I am thinking of the old saying that in order to know how to heal you must also know how to hex or in order to cure you must be able to curse. Or how about this one from a 14th century Scottish man referring to a local cunning woman:

“She was either a witch or a woman of God.”

Any way you slice it, the line between benevolent and baneful magics is ever present and thin — but on days like today it is especially so.

I remember reading in Brian Froud and Alan Lee’s Book Faeries about the Scottish tradition of the Seelie and Unseelie Court — the belief that the Unseelie court of faerie ruled the dark part of the year from Samhain until Midwinter.

The Unseelie court was believed to be composed of the more mischief-making or in some cases downright harmful and deadly faerie creatures. In honor (and fear) of their reign, farmers would leave untouched any crop that had not been harvested by the evening of October 31st-it was considered forfeit — an offering for the faeries and not fit for human consumption.

This is just one of a plethora of traditions found around the world that recognizes the change in power and energy as the life/death/life cycle circles around and around spiraling into the heavens and down into the dark earth. It is those apparently opposing forces that are also at play with the curing and cursing dynamic.

Curing and Killing in Plant Medicine and Magic

As a student of Ancient Greek, among other things, the issue of cursing and curing comes out of language — as is well known in entheogenic circles, the Greek word for poison is the same word for medicine (pharmakon) — where, etymologists may be able to see, we get current words like “pharmacy.”

Many of our natural poisons have incredibly potent healing properties. Consider the digitalis derived from Purple Foxglove (Digitalis Purpurea) that can stop a heart or assist in curing congestive heart failure, the highly toxic Black Henbane (Hyosyamus Niger) that traditionally has worked with to induce visionary trance and the sensation of flying but also as a topical analgesic to relieve pain and swollen joints.

Monkshood (Aconitum) is deadly in the right dose but has been used medicinally for thousands of years, and Belladonna (Atropa Belladonna) is the source for the drug Atropine.

Perhaps most famously, snake antivenins are usually composed from the original venom itself.

Knowledge of the Poison Path (as Dale Pendell terms it) is sought out for many reasons — people want to understand these plants and poisons that have held such allure through time and history, people want to experience hallucinations or get high for recreational reasons, devotees wish to engage in ritual usages –some of which are millenia old, but as Aldous Huxley famously wrote when high on Mescaline, derived from yet another potent plant — Peyote (Lophophora Williamsii), the doors of perception are opened.

The Poison Path is a rich place to begin any consideration of the relationship between curing and cursing because our first and truest teacher — Nature — often combines these elements in the same being. A little too much of that and you are sick or dying, but just the right amount and you can be saved, pain-free, wholesome.

What I have learned in my own practice is that these poisons/medicines have the ability not only to cure or kill, they can pierce through our current perceptions and reveal new possibilities that were hidden behind a veil of illusion.

The idea of being pierced is as old as cupid and even older, I feel it finds one of its most beautiful expressions in the Sacred Heart of Jesus Christ In Catholic and folk-Catholic-magic traditions the sacred and pierced heart is a requisite for curing or cursing — I believe that in magic period a pierced heart is a requisite because the pierced and sacred heart represents a heart that has been cut, punctured, wounded in some way and yet is still vital, still beating, still blessing, sacral, and sacred.

It is a theme we see in baneful magic again and again — the piercing and puncturing of a heart to wound, curse, or in some cases sting into regret and recognition, and yet having a pierced heart is absolutely emphasized in healing and love work as well.

Living in the Southwest where the harvest cycles definitely do not follow that of the Celtic year, I know our own land wights and spirits are on a slightly different calendar, but we have our own versions of the life/death energies — and one of the most popular dualities right now if that of Nuestra Senora de Guadalupe: Our Lady of Guadalupe & her skull sister Santisima (or in some areas Santa) Muerte-Most Holy Death or Our Lady Most Holy Death.

Our Lady of Guadalupe and Santisima Muerte

These two are actually sister figures — both based on ancient Nahuatl Goddesses. Our Lady of Guadalupe is the Catholicized incarnation of Tonantzin while Santisima Muerte is a Catholic-folk and increasingly so-called “narco” saint based on the Lady of Death, Mictecacihuatl. In Nahuatl-Aztec culture Tonantzin was an earth and fertility Goddess, bringing life giving rains to the hills, valley, and canyons, and bestowing life giving properties on the land and the people. To include our sacred plant theme, some believe that Tonantzin is specifically affiliated with the Agave plant and its various ritual and ecstatic uses. Like the Summerian Inanna and her skull sister Ereshkigal — Tonantzin had a relationship with her own shadow sister, Mictecacihuatl, the Lady of Death. In Meso-American culture death was highly esteemed because the ancestors were seen to be guiding forces of both wisdom and prophecy. Therefore the Lord and Lady of Death had to be propitiated whenever someone passed beyond the veil so that they would accept their soul and as it were, make a home for them. Mictecacihuatl possesses the guise of Santisima Muerte — who has interestingly become increasingly allied with those involved in the illegal drug and arms trades in Mexico and the US-Mexican border — but she is also known throughout the Southwest simply as La Huesera –– the bone woman — and is venerated as such, the Mother of death who sings life into the bones so that the cycle may spiral out yet again.

I am always interested in ideas that are apparent opposites but underneath share a solid unity with one another. In the case of hexing and healing or cursing and curing I believe that this foundation is strongly present and the folk magician should at the very least understand the relationship — perhaps as the winds blow from the otherworld into our own they will carry a bit of wisdom with them to aid us in our efforts.

May you all have a beautiful Halloween, Blessed Samhain, and delightful Dia de los Muertos!

A version of this article was printed in Amulet Magazine’s Fall 2013 issue.