How to Unfreeze and Find Hope

Hope, as my Spinning Gold students know, is not the only virtue, and love is often heralded as the greatest, so why is hope singled out at the entrance to the most hellish of hells? Why is that the virtue that we must let go of most completely?

I’m thinking about this as I face the New Moon in Aquarius, the Human and Humanist within the Zodiac, the energy that most aligns with what is new, next, and possible. When we honor Aquarian energy, we are ready to ask what comes next. Ready to breathe new life into our vision of the future.

But those future visions are not as easy to cultivate as they once were. What we have been reminded of is that the future – whatever that is – is an ever fluid and moving thing. There is a part of us that goes into every week knowing that we might need to turn on a dime, knowing that it has never been truer than now, that saying: Man plans, God laughs.

In a way this is good. Many of us are becoming more flexible and adaptable than we ever thought possible…and we are holding onto that flexibility too. We are all learning anew what it means to be truly present, we all take less for granted now than we did two years ago, we are all a little closer to Necessity – both the force and the Goddess.

And there it is again.

In the Inferno, hope must be released because there is no future to look forward to. The damned souls will play out their story repeatedly. Some of the tortures Dante concocts are horrific, but they all pale in comparison to the sheer fact that there is nothing to look forward to, nothing towards which one can aspire. Nothing to hope for.

The one who has it this worst is of course Old Scratch himself. The ninth circle of the Inferno is where the Devil dwells and it is not hot, as you might think given the name. Instead, it is cold. 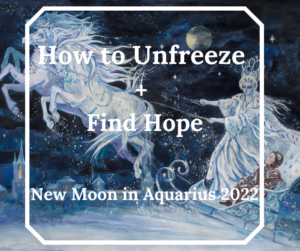 In the center of all of the ice is the Devil, Morning Star, brightest angel of God, beating his wings frantically, trying to get free – wings that end up functioning as a pair of great bellows heating up, creating, the very hell he is trying so hard to flee from. Dante was Christian, and one cannot read his description of the ninth circle and not see the pity he felt for the Devil, a pity because he recognized the signs of his own frozen state, caught, as he tells us in the very beginning of the Inferno, in the dark woods of his mid-life, unsure which path to take.

Dante had suffered a deep trauma before penning the Divine Comedy, his beloved had died. And so here he is…frozen…unsure of where to go next. How similar it feels to this moment today for many of us. Frozen in place. Afraid to let ourselves dream. Afraid, above all, to let ourselves hope.

To freeze is a logical response to trauma, pain, and/or threat. It is the third way running between fight on the one hand and flight on the other. Freezing may not move us further but it won’t do more damage either…or so we think. And so we freeze in a number of different ways.

We find ourselves frozen in relationships that are way past their due date, in our ideas about the way the world works – even when firsthand witnessing tells us otherwise, freezing out those voices and ideas that might disagree with us, and freezing most of all in the dreams we dare to entertain, to hold, to imagine.

So what is the medicine for this condition?

We find it in another story of course! In the Snow Queen, an evil Goblin enchants a mirror and then sprinkles its jagged pieces across the face of the Earth. The spell cast makes anyone who gets a bit of mirror in their eyes see only the worst, act only from a place of cynicism, view only what is blocked and not possible, only the hard and never the hopeful. I don’t think you need me to tell you there are Goblins aplenty at work right now and it’s more than easy to get some mirror in your eye.

As these things go, a young man becomes afflicted by the curse and then a mysterious figure – the Snow Queen – takes him to her palace. His heart-friend fears for him and so she searches high and low and finally finds him, but he is coldly indifferent to her, frozen off from the feelings he once had.

Knowing that her beloved is so very close to turning into ice and remaining with the Snow Queen forever, the heart-friend begins to weep hot, salty, tears which begin to melt the ice the young man has surrounded himself with. Then, as the first thaw sets in, and the skin is set to burning and tingling, the young man begins to weep too, and as he does the bit of cursed mirror is released from his eye, carried on a river of tears.

This is the medicine.

If you feel frozen, if it feels impossible to call in the future, to hold a vision of what to hope for, then know that there is someone out there…be they child, lover, animal companion, plant, or creative calling that is weeping over your disregard…weeping because you will not give yourself a chance to see them, weeping because they will continue to go unseen.

Let them weep over you, offer up your own hot and salty tears so that the jagged edges can be finally washed away. In their place find your ability to hope, once more. And then…go out and find your future.

Fill out this form!

Fill out this form!
[email protected]