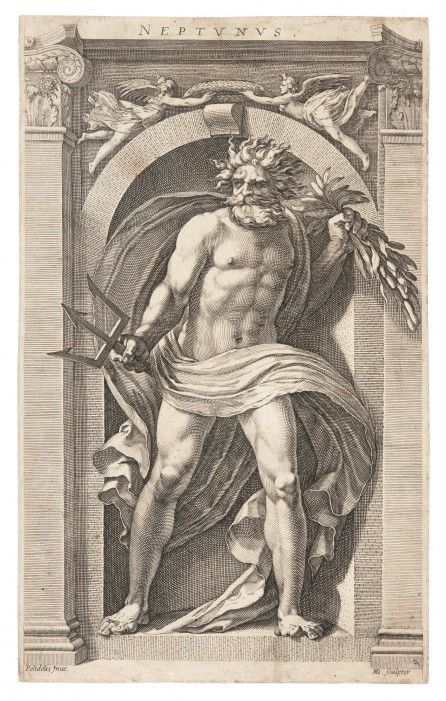 He is known as the Earth Shaker, a lover of horses, of waves, and of depths, his original name most likely hails from the Sanskrit root “dawon” meaning, one who flows. It is easy to write off Neptune or his Greek equivalent Poisedon as vain and vainglorious Gods who care little to nothing for the affairs of mankind but to do so would be a grave mistake.

With his trident Neptune can cause the earth in of her greatness to literally shake and tremble, causing earthquakes and tidal waves and great flooding. Sometimes disruption is necessary, and when it is, he is a Holy Helper to call on. As the creator of Earthquakes he is also a Holy Helper to call on for protection from shifting and moving ground as well as big waters and flooding.

His trident could cause destruction, yes, but also could call up fresh or salty water from the earth’s layers to spring up and through even the most parched lands. And so he is an ally for anyone who is trying to bring more moisture, suppleness or fertility into their lives, anyone who finds that their life is too dry, too desiccated, lacking creative flow and depth would do well to call on him.

He is also strongly associated with horses, animals known for their sensitivity and their power, but also strongly associated in the ancient world with the art of healing. We may call on him whenever we are working with horses, but also whenever we need to have the qualities in our own lives that we associate with horses – power, attention, sensitivity, great endurance, and keen intelligence. His favor may be sought in matters of healing – both by those who heal and by those who are in need of healing, for water and healing have been associated with one another for age upon age.

The newer stories say he pulled the wrong lot and was given domain over the depths but the older stories tell of him choosing to make the vast deep his home…and so he can aid us in feeling at home there as well. He is a God of both sea and freshwater, not picking one over the other. For all dealings concerning water – from finding it, to purifying it, to working with it or harnessing its power his favor must be sought out. Beloved by fisherman and those who work with the Sea, he may also be called upon by those who are invested in protecting the sea and all of the life it holds, and by those who are working for equitable water rights around the world. As the seas warm and rise he is a particularly good Holy Helper to get to know. Neptune is the one who holds our hand when we go deep – into our physical world and into our psychic terrain. For this reason he is also associated with dreams and the Zodiac sign over which the planet named in his honor – Pisces – rules, are known to be the dreamers and the ones who are most able to speak to and with dreams.

He is the protector or challenger of every voyager who must cross water. Making an offering to him before setting off on a water-heavy adventure is always a good idea. One of his sons is said to be the founder of Atlantis, the sacred isle that destroyed itself with the very technology that allowed it to be so very advanced. The ancient Greeks spoke of Atlantis as ancient meaning that Neptune has seen it all unfold this way many times before. For this reason, it is deeply associated with history and specifically our ability to learn from our history. So we may call upon his aid whenever we need to reflect – globally or individually – on what history has taught us and what it will continue to teach us.

In his oldest stories he is the husband, the lover, the devotee of the Earth herself, and we cannot help but reflect on how the sea ever and always kisses the land. Wherever the Earth finds herself in need of a protector, defender, or servant, Neptune may be called upon, for he bears the waters that bless the rich dark soil and allows all growth to happen. His depths mirror our own and in his waves we can find strands of our own story reflected over and over again.