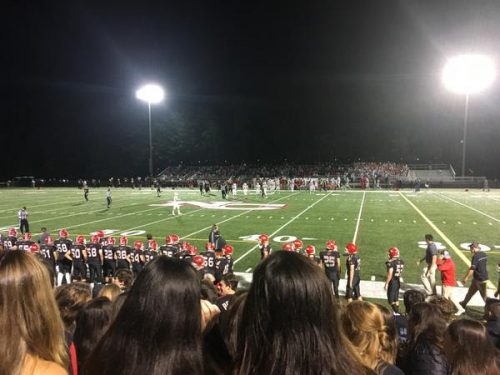 You’d never know it was early September here in San Antonio. Every so often we get a thrilling hint of the big change coming, but most days the 100 degree temperatures will throw us off track. I was sitting at the edge of the sandy pitch of a field watching a football game the other week while the sun pounded down on top of me, wondering, how did this happen…? What wrong turn did I take?

It wasn’t just the heat. I was in this field, in the sun, to watch my son play football. This was not something I could ever have seen coming. Growing up in Texas there were a few things I made it my business to avoid: pushy Bible-thumpers, getting married too young, irresponsible gun owners, sport hunters, and…football.

Although there was a very brief period where I waved pom-poms and shouted cheers on the sideline of football fields, and the time I sang the national anthem to open up a state championship game, I did not like the sport. From my viewpoint, it was the source of never-ending budget woes for the fine art departments all across the state. Football was always the reason we couldn’t afford new costumes or light gels or sound systems for theatrical and choral events. But even more, I bought into the notion that all football players were dumb jocks and chose to ignore or overlook the fact that there were quite a few of them in my honors and advanced placement classes. Football was huge at my rural high school. It was everything to many people, life itself, and I wanted no part of it. I didn’t like it and so I paid zero attention to it.

After high school, I went to a very small liberal arts college tucked away in the mountains. The college did not have a football field, much less an athletic team. (We did, however, have “Spartan Mad Ball”, but that is a story for another day.) So I never really thought much about the game after the age of 18. I would watch the Super Bowl with my family for the commercials and I cheered when the New Orleans Saints won one year and when the Eagles won a couple of years back because I like come-from-behind victory stories of any stripe. But generally speaking, football was not a part of my life in any significant way.

Our oldest child is a gifted visual artist and musician. He likes playing basketball and soccer, and so I never really had cause to think about his relationship to football other than to look at the data around concussions and decide unilaterally that he would never play full contact unless the game radically changed.

Then, last spring, talk of flag football came up. Then again, in summer when registration opened. I found myself in both cases writing my son’s name on the lines of various lists, and it was like the experiences you hear people report when they die – of seeing themselves from a far off distance…it was like that, disembodied.

Before I knew it, a team had been formed and my son came home and told me he was playing “center”. My husband told me that our son would be responsible for “snapping” the ball. He said this as if it were perfectly obvious what all of those words meant. And all I could think was “damn, damn, damn, damn…I have no idea what is happening!!!”

If you know any kids, you know that every now and then they talk about stuff with this air of confidence and you maybe know .05% of what they are talking about. But you still know .05%. In this case, I knew precisely 0%. This was a first for me. So I woke up early as I do, worked on the upcoming book, and then found myself in the unfamiliar world of ESPN. And friends, it is a WORLD.

I learned the basics about flag football, the names of the positions for starters, and delved into the craziness of different plays. I discovered that many of the best college players are also outstanding academically and that some of the greatest pro players of all time were also dancers. I saw lots of articles on the various problems and hypocrisies of the NFL and of pro sports in general, but I also saw community outreach and the ways that these organizations are trying to do better. I was humbled by how much I didn’t know, and by how many wrong things I had assumed. I talked to a mom friend of mine who is sports savvy and I confessed my ignorance and new-found knowledge to her while she benevolently chuckled.

Now I am not sure that I could call myself a fan of football. In fact, I am pretty sure I can’t call myself that. And I have no clue if my child will play after this season or if his little brother will want to play at all. But none of those things are the point of this story. This is not about how I came to love football. Rather, this is about how I thought I knew something for sure – about an activity, the people who do it and the people who enjoy it – and how I crashed, face-first into how wrong those assumptions were. It was painful, what they call a “growth” experience, but it was also direct teaching about magic.

Think on it. Take whatever situation you would like to magically charm this way or that and ask yourself what assumptions underpinning your intentions you are carrying about the situation, about the people involved, about the external conditions, and most of all about your relationship to those things. What if your assumptions are off by just a little? What if they are dead wrong? What if there is a lot more territory to roam and explore within the situation than you originally were able to see? How does that change your magic? How does that change you?

You know if you’ve read my book “Making Magic”, that I never give a “definition” of magic. In my view and experience, no such thing is possible, because magic is radically particular to each person and each situation.

But we can describe some conditions for magic, and this is one of them, the moment when one of your most cherished beliefs is given a vigorous shaking by some experience.

Magic happens in the space these questions create. the changes that could flow from them, and our ability to follow them out where ever they may lead. It happens in the completely unexpected, un-looked for, and least likely places…like a hot football field in South Central Texas.

So, I’ll continue to sit there in the 100 degree heat watching a game that challenges all of my assumptions, because I want to see where all of this leads not only with my child but with my relationships and with my life as a whole. What friendships will be created, fostered (or even dissolved)? What new insights will this experience afford all of us? What magic will be made?

We are celebrating a Full Moon in Pisces today, and Pisces loves challenging assumptions. Let yourself celebrate by paying close attention to your dreams and taking a magical sacred bath.